Red Tiger This beautiful red form of boa constrictor with reduced drawing appeared in my snake breeding in year 2004, when I crossed Fire pastel dark drawing female and light Orange pastel salmon.
Then 90% babies were born with very reduced drawing. They had just crosswise pinstripes, which ended with small triangles on both sides, looking like a tiger stripes. The side drawing was reduced also to small vertical lines. Otherwise the whole body was completely clear without spots or dots.
Half of the babies were red, not only on the back but also on the belly in the same intensity. I chose the best ones for breeding . They had even more intensive red colour when they grew older.
I worried that when the rabies grew older they would become darker or get more spots, but on the contrary their drawing was very clear.
Even as adult the boa constrictors kept their beautiful colour and drawing.
I breeded a male of this form with a normal female to try, if the drawing would be also codominant, i.e. if half of the babies would share it, which confirmed to me.
So these boa constrictors are codominant pastel with beautifly red colour but red tiger line has moreover very interesting tiger drawing, which is inherited by codomination. This line is very interesting also in hypo colouring of salmons. Year 2009 first babies from the breeding of hypo red tiger x hypo red tiger were born, thus the first Super red tiger in ideal genetic combination red superpastel
Year 2012 first baby Jungle Red Tiger, (Litter Jungle supersalmon superpastel X Red Tiger)
4 Red Tiger 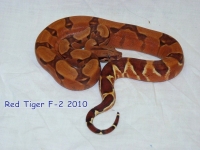 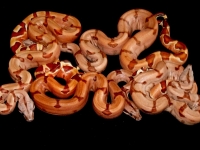 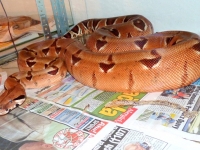 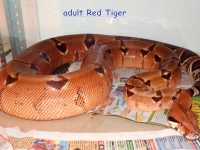 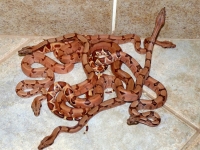 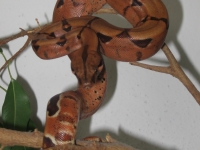